The history of Arabian Nights

We can’t understand the huge potential of this collection without exploring some background. Arabian Nights was introduced to the Western audience in the form of book in the time when fairy tales were favorite pass time of nobility in French and other European courts.

The man behind the Arabian Nights as we know them today is Antoine Galland (1646-1715). He was archaeologist and orientalist.

He was also personal friend of Charles Perrault, who is often credited as the father of modern fairy tale. Galland spent many years in Middle East and encountered the manuscript The Tale of Sindbad the Sailor in today’s Istanbul.

He decided to translate it to French and published it in 1701. After huge success of the book he decided to translate all the stories from old Syrian manuscript of unknown author (probably dozens of authors and even more ‘editors’) with hundreds of novels, fables and tales as the Thousand and One Nights in twelve volumes altogether.

He published them between 1704 and 1717 with last volume being published after his death. 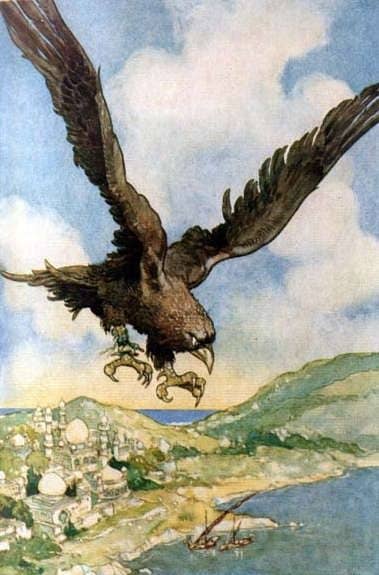 Scene from Sinbad the Sailor, by Rene Bull

1001 Nights by Antoine Galland is still the ‘standard’ version of Arabian Nights in many countries but we should know it is heavily revisited. Galland deleted or at least softened all the ‘adult’ scenes in the collection where women’s infidelity and cruel punishments were main motifs. He also deleted all the poetry which was in his opinion considered as an unnecessary ornament by Western but was mandatory in Arabic narrative tradition.

Galland’s edition is without doubt still the most influential for understanding the Orient in Western countries. Its exotic scenery and magic made huge impact on many authors (to name just few: H. C. Andersen, Charles Dickens, Robert Louis Stevenson and Edgar Allan Poe) but to be fair we must note at least one more ‘classic’ translation: by Sir Richard Burton.

Why is book of 1001 Arabian Nights so important? 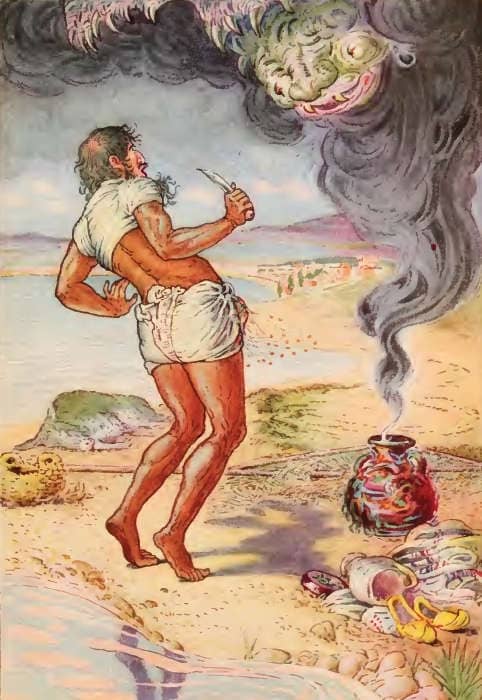 The Fisherman and Genie, by Louis Rhead

Tales of Arabian Nights are not just another book. They are not only a work of art. They are not only an ornamental description of 1001 nights of stories. Arabian Nights stories are one of the magic doors to some kind of parallel universe where everything is possible yet human nature is still the same aas always: selfish or generous, smart and stupid, rich and poor, the unforgettable exotic characters in which we can always find ourselves.

I guess sometimes the best way to find oneself is – to loose oneself for some time. Why not in a great book like 1001 Nights (as we say in our country)? So I highly recommend the Arabian Nights collection!

Scheherazade (in Persian this can be translated as: ‘of noble lineage’ and in some interpretations ‘born by lion’) was the older daughter of Shahryar’s vizier.

After series of cruel murders she was the one who demands from her father to stop king’s insanity. She wasn’t only beautiful but also very smart. In Shahryar’s bedroom she started to tell a story but didn’t finish it.

Shahryar decides to postopone her execution to find out how the Scheherazade’s tale finishes. But when she concludes the story she skillfully starts new one and in the next morning Shahryar still wants to know what happens next!

This game of telling a fable after fable, tale after tale lasts for one thousand nights and on the one thousand and first night Scheherazade introduced three sons she born in the mean time to her husband. Different versions of Arabian Nights offer different endings but in all we have a happy ending. Scheherazade stayes alive and Shahryar becomes wise ruler and good father and husband. 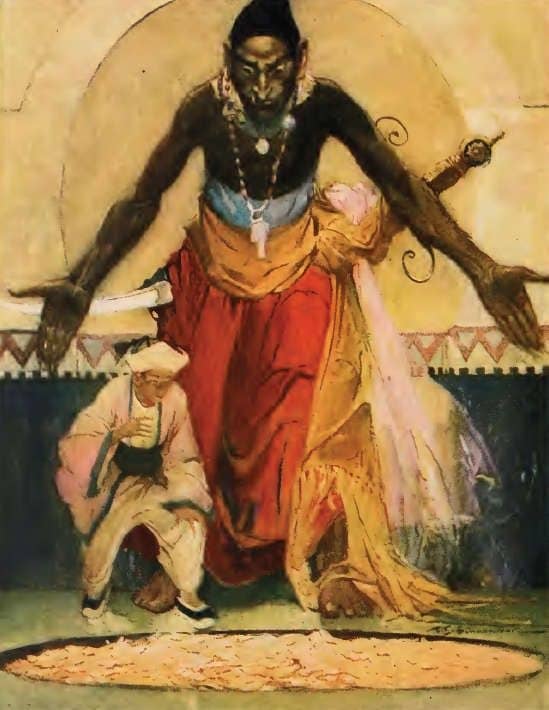 As we can conclude this frame story, full of passion, blood and fear is aiming at adult audience, although today the tales of the Arabian Nights are mostly considered as fairy tales.

This transformation happened to many tales and fairy tales, but Arabian Nights retained special status. They are still interesting to adults who can easily identify with many intriguing characters in this collection.

Tales of Arabian Nights is a collection of Middle Eastern folk tales.Arabian Nights is also known as One Thousand and One Nights (Arabic: أَلْف لَيْلَة وَلَيْلَة‎ ʾAlf layla wa-layla). The work was collected over many centuries by various authors, translators, and scholars across West, Central, and South Asia and North Africa. The tales themselves trace their roots back to ancient and medieval Arabic, Greek, Indian, Jewish, Persian and Turkish folklore and literature. In particular, many tales were originally folk stories from the Abbasid era, while others, especially the frame story, are most probably drawn from the Pahlavi Persian work Hezār Afsān (Persian: هزار افسان‎, lit. A Thousand Tales), which in turn relied partly on Indian elements.Tales of Arabian Nights (1001 Nights) is one of the greatest works of the world, especially in the field of children literature. Most of the compositions are collections of mythology of ancient Arab, Iran and Indian countries. The stories are full of imaginative, talismanic and magical events.If you are a fan of arabian nights stories along with various themes such as short stories about magic, imagination, love, family, motivation, values, educational, everyday stories, you can find dozen of the best stories of all time in this app. Tales of Arabian Nights (Alif Laila) is a 1001 Nights Stories app in English that is easy to use with an attractive interface design.Main Features:* Small Size – As all tales/stories are in text format, so app size is very small (only 2MB) as campared to order apps and its totall * Zoom and Change Text Size – zoom option to increase size of the story text* Favorite – You can easily add their tales/stories to favorites to read it later.* Share – Tales/Stories can be shared to all available social networks, such as facebook, twitter, whatsapp, instagram etc.* Text Selection – As requested by many users, we have enabled Text selection on the story page. Long press on the story to activate the feature.* Totally offline* Some of the stories from Tales of Arabian Nights: – Shahryār and Scheherazade – The Merchant and the Genie – The Fisherman – The Second Old Man with Two Black Dogs – The First Old Man with the Hind – The Wazir Who Was Punished – The Young King of the Black Isles – The Greek King and the Physician Douban – The Husband and the Parrot – The Three Kalendars, Sons of Kings, and of Five Ladies of Baghdad – The First Kalendar, Son of a King – The Second Kalendar, Son of a King – The Envious Man – Story of the Third Kalendar, Son of a King – The Little Hunchback – The Barber’s Fifth Brother – The Barber’s Sixth Brother – The Story of Sidi-Nouman – The Story of Ali Colia, Merchant of Baghdad – Prince Camaralzaman and the Princess Badoura – Noureddin and the Fair Persian – Aladdin and the Wonderful Lamp – The Adventures of Haroun-al-Raschid – The Blind Baba-Abdalla – The Enchanted Hors – The Story of the three Sisters – The Seven Voyages of Sindbad the sailor – And Many More…What is common throughout all the editions of the Nights is the initial frame story of the ruler Shahryār and his wife Scheherazade and the framing device incorporated throughout the tales themselves. The stories proceed from this original tale; some are framed within other tales, while others begin and end of their own accord. Some editions contain only a few hundred nights, while others include 1,001 or more. The bulk of the text is in prose, although verse is occasionally used for songs and riddles and to express heightened emotion. Most of the poems are single couplets or quatrains, although some are longer. 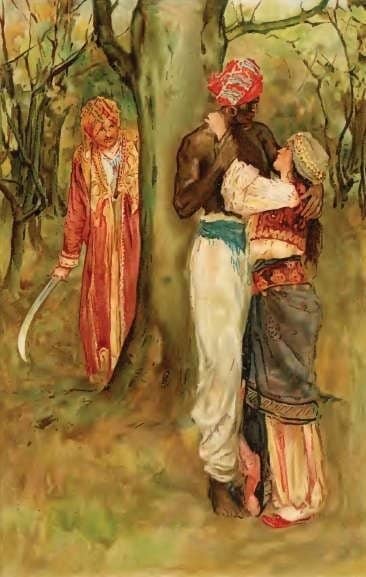 Walter Paget: The Story of the Fisherman

Word ‘shahryar’ comes from Persia and means ‘high king’ or ‘ruler’. So if we say king Shahryar we are actually doing needless repetition. Shahryar was powerful king who’s brother (he was a king too) accidentally learned about unfaithfulness of his wife. When they together found out Shahryar’s wife is no better, they decided to leave the town until they discover somebody who is even more miserable than they.

This happened surprisingly fast and Shahryar concludes all women are the same. He decides to make some shocking changes. He ordered his wife’s execution and remarried. After wedding night he ordered to kill his new wife too so she could not have a chance to become unfaithful. He repeats this cruel practice, somehow similar to the one known from the tale about the Bluebeard until he marries Scheherazade. 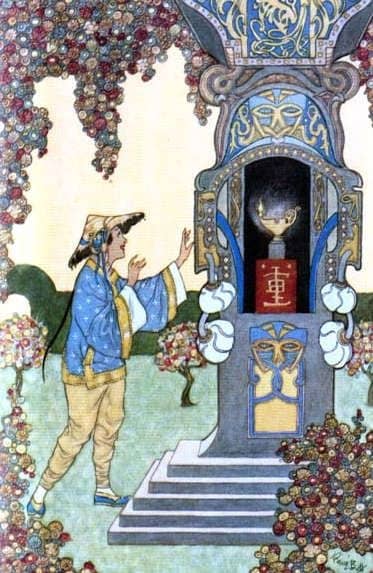 Scene from Aladdin, by Rene Bull

Andrew Lang made huge work with collecting and editing fairy tales from all over the world. Arabian Nights Entertainment was only one of his many works but unfortunatelly it wasn’t his best. He was of course aiming at children, so his version is censored but this was done without second thoughts and many of the stories have lost their charm and even internal logic because of his heavy cuts.

Let me give you only one example. We have already mentioned the motiff of infidelity. In Galland’s edition this act would be described as betrayal of trust and revenge, in Burton’s we would see all the juicy and bloody details, but in Lang we would learn only she was talking with a stranger and her husband killed them both for that!

If we can accuse Burton and Lang to exaggarate each on one field, Galland’s version has another problem. Remember? It is written in French!

Richard Burton and The Arabian Nights

Sir Richard Francis Burton (1821-1890) was British explorer, soldier, spy and translator among who’s achievements is visiting Mecca in disguise (this holy city is still prohibited for non-Muslims). He also visited Great Lakes of Africa as first European (together with John Hanning Speke).

Sir Richard Burton is credited for many translations and Kama Sutra, the ancient manual of love, is probably most known of all. But Arabian Nights Entertainment (he changed the title to emphasize the origin and goal of the tales) comes close second.

Barton’s Arabian Nights wasn’t first translation in English (first appeared in black market soon after Galland’s book and without Galland’s knowledge) but it was most comprehensive and is still major work by which the standards for all next translations in English were set.

The 1001 Arabian Nights of Stories with Scheherazade

Can one night or even 1001 nights change the world? Collection of tales and stories known as The Arabian Nights can!

World is full of great books but only few made such an impact as Tales of Arabian Nights. This fascinating stories are probably the most influential art work of non-Western origin in the West.

Thanks to many literary, music, movie, theater and other adaptations the characters from Arabian Nights as Scheherazade, Aladdin, Ali Baba, Sinbad and others are now part of global culture and their astonishing fairy tales still inspire millions of creative minds all over the world.

(Image credit: Virginia Frances Sterrett, all used images in this lens are Public Domain, for more info read the part with resources at the end of page.) 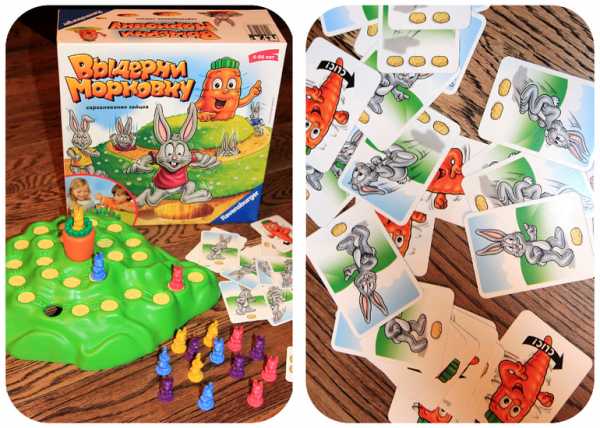 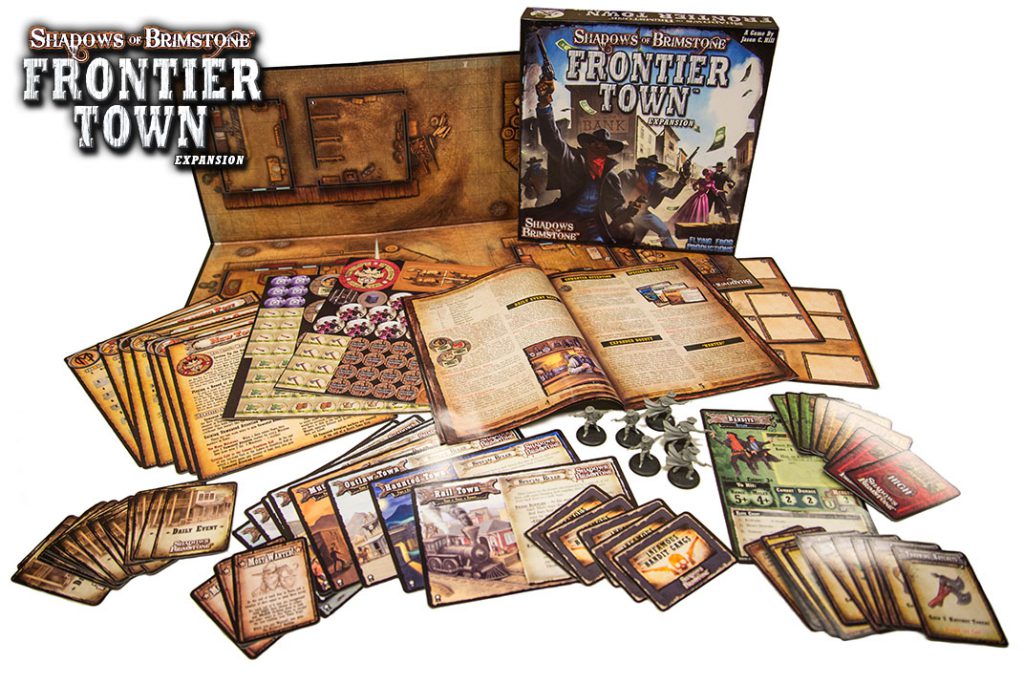 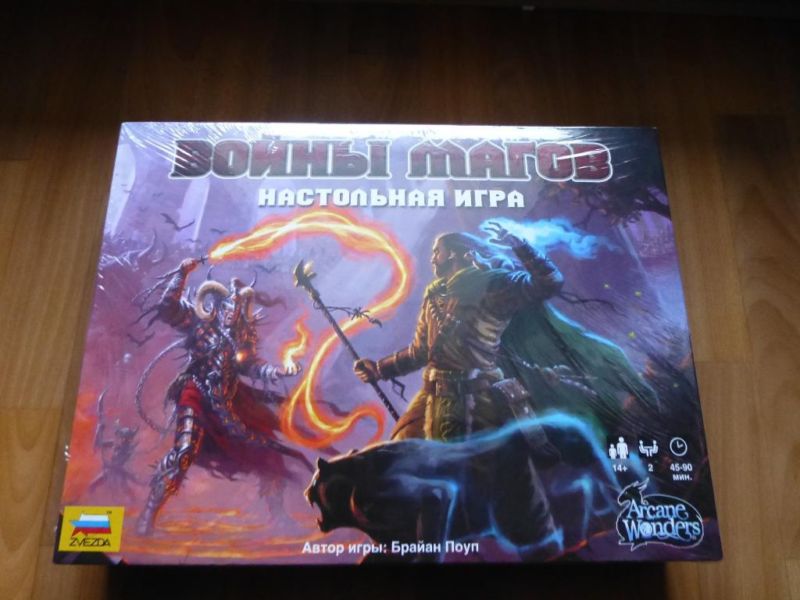 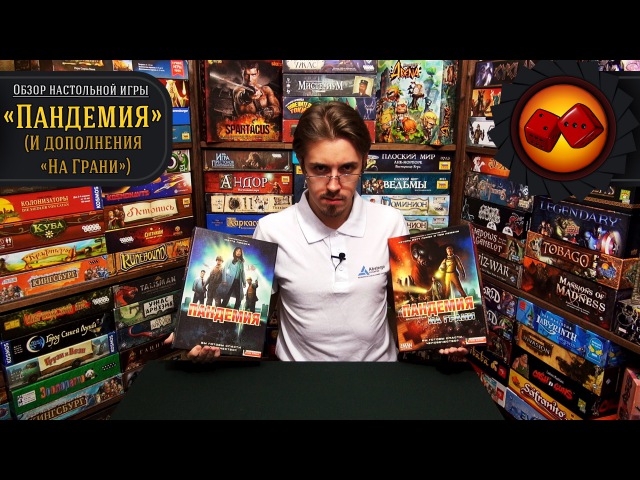